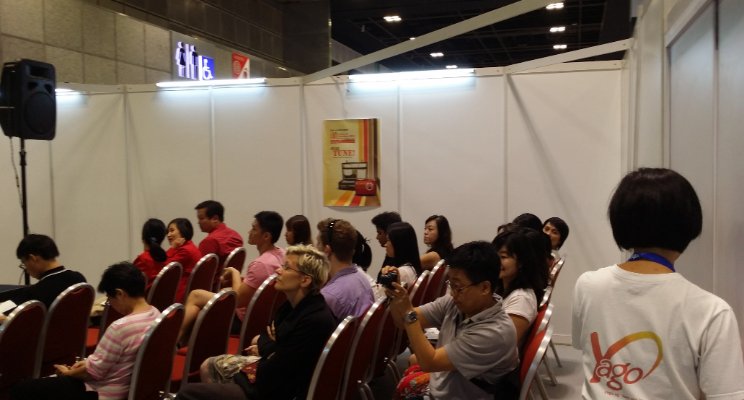 This is the story of how I got the chance to speak at an education fair as a subject matter expert in language learning and got maximum mileage out of it by integrating different marketing approaches.

It’s only about student recruitment in a roundabout way: the process I used. If you find the story too detailed, you can skip to the key learnings at the bottom.

Career & Education is one of Singapore’s largest career fairs. It features a mix of employers, Singaporean and foreign education institutes and agents.

And out of the blue, I was contacted by the organisation to hold a talk and host a subsequent panel discussion on language learning.

You might say, “great opportunity”. But I had been to the fair. And I’d noticed, like on many fairs, that the talks often don’t draw much of a crowd.

So I decided to challenge myself to make this the best visited talk and completely fill the venue.

Achieving this isn’t a matter of employing just one tactic, it requires an integrated campaign.

I had been blogging about language learning for a while. This gave me an advantage: I knew which headlines resonated with people. In fact, when e-mailing my subscribers, some topics would consistently get people to reply their e-mails.

Based on my experience with the subject, I chose the topic “How long will it take to learn a new language?” and made this explicitly about my own experience (the conference producer, Ryan O’Connor, also asked for a personal approach).

Here is the e-mail I created.

You’ll notice a number of things I did to improve the response rate:

The open and click rate for this e-mail weren’t particularly great. This was just a first stage filter to get to the interested people:

Step 2: Get the message in front of enough interested people

On Yago, I had accumulated just short of 5,000 newsletter subscribers. That was my hottest and most obvious audience. The response from this group was great and around the talk, I got to meet some of my followers for the first time.

But this list size was not large enough to really fill the room. Fortunately, Informa Exhibitions was happy to send out the message to their list as well. Their list consisted of several hundreds of thousands of people, and eventually brought in the majority of people.

The response rate wasn’t anything special. But it allowed me to get to the people who were sufficiently interested to really come to the talk and preregister.

Step 3: Motivate the audience to actually show up

With step 2 and 3, I secured 84 preregistrations. But if you think all of those 84 would all really show up, you’d be deluding yourself. It’s one thing to be excited about an e-mail. It’s another thing altogether to get up in time on a Saturday and give up on all other plans to come down for a talk.

The preregistration consisted of a short form (long forms scare people) which included their e-mail address. This allowed me to send a reminder.

The talk was a while ago. If it were today, I’d additionally be using Facebook retargeting to get in front of my audience with ads.

I didn’t do that. But I did send them a compelling reminder message on Thursday (the talk was on Saturday morning): 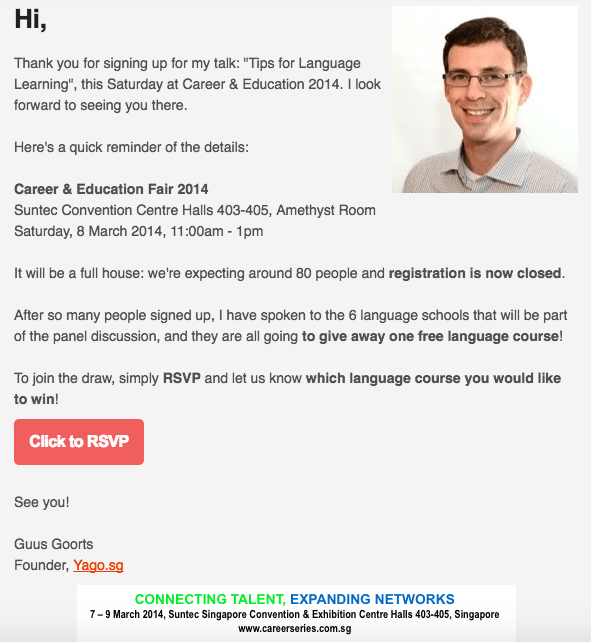 With this e-mail, I was talking to pre-registered people only, and besides reminding them, giving them an additional reason to come. As expected, the open rate was really good.

We had to delay the start of the talk. The fair only opened at 11 am, and at that point, people still had to register before being let in. People were queuing up to get to the talk! 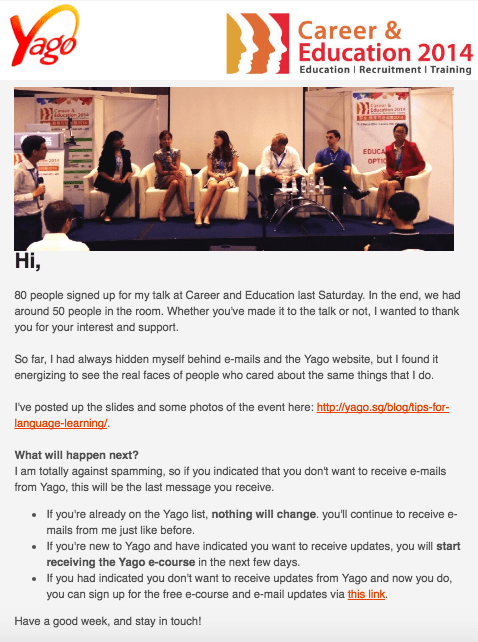 I now had a neat list of people who had visited to talk or expressed a strong interest. As a service to the list, I e-mailed them the slides. At the same time, I set an expectation that if they had chosen to receive updates from Yago, they could expect other e-mails with tips.

To build good relationships with your prospects, it’s very important to always be fully transparent and let them know:

By timing this message to go out on the next Monday after the talk, the e-mail did very well.

That wasn’t the end of the follow-up, though. Friends had recorded the talk and panel discussion. Over the next weeks, I clipped short videos about subtopics and posted them online and shared them with the list as well. They’re also on YouTube.

It’s not the platform, it’s the story! Develop a compelling, personal story, and share it across multiple platforms. Much of my presentation was based on an e-mail sequence that I had created before. By bringing it to a “live” talk, I got to engage deeper with a very motivated group of people. The videos and presentation itself still live on on the Internet

You need reach. But don’t forget about depth. If I could communicate with a million people once, or with 10,000 people for 5 times, I’d take the second option. Instead of trying to plaster your logo everywhere, develop a compelling story (in the case of Higher Education, this is most likely a story about one of your students) and make it accessible in as many ways as possible.

In the above story, I have shown a number of ways in which one interaction can morph into a series of 5 touchpoints or more through e-mail, retargeting, and repurposing of content.

Strong content is the backbone of your campaign. Don’t create content for the sake of putting something out there. Hunt for compelling stories among your students. This can be endless and lead to loss of focus, but all you need is one compelling, somewhat longer story, which can be cut up into segments and repurposed in different ways.

Don’t expect education fairs to provide you the audience. Education fairs can be a great venue to deepen your relationship with people who already had your institution on their radar. Run a digital campaign to make your ideal prospects aware you’ll be present at the fair. That already secures two touchpoints in itself. You will likely also be noticed by new people, more so when your booth and talks are a hotbed of activity.